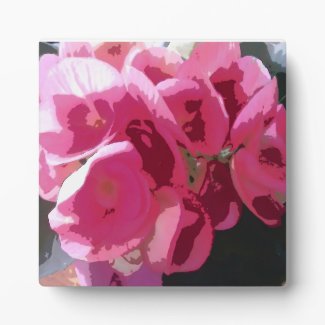 I had a very lovely Mother’s Day this year. We woke to cold weather and snow, so it was too cold to garden. We did a window visit with my 91 year old mother and gave her a lovely planter of Begonias and Coleus to stay indoors for now. With the frost in Ontario this weekend, it is much too early for Begonias to be outside. Geraniums, Pansies and Petunias can survive a little bit of cold weather, but the Begonia’s soft stems are easily killed by cold.

Even with protection, Begonias will not generally survive a frost. They are tender annuals in Ontario and perennials only in tropical and semi-tropical parts of the world (South and Central America, Africa and South Asia). Begonias belong to the family of flowering perennials – Begoniaceae of which there are more than 1800 species. The species was named to honor the former governor of the French colony of Saint Domingue – now Haiti.

One of our young adult children works at a pop-up Grocery store garden centre. They received a shipment of about 80 Begonias the other day which could not be brought indoor for this weekend’s frost. There is no physical store, only a tent, and so the Begonias were devastated. He received a lot of criticism from garden shoppers yesterday. I guess they felt mom-like speaking to my boy about not doing his gardening chores correctly. “Why didn’t you bring them into the heated area?” There is NO heat in the tent, and the snow came down through the netting which qualifies as a tent roof. Even though the Begonias look dead, many customers were asking to take them home for free. They were declined. This criticism and request for free Begonias just makes him more stubborn about trying to rescue and revive the Begonias!

Once a potted Begonia has been exposed to frost and snow, it will not likely survive – but if you have nothing to lose by giving damaged Begonias a chance – why not? Begonias in pots do not usually have too much depth to their roots system, but if they do, they may recover somewhat. There will still be lots of die-back though. It’s best not to cut the frosted stems back immediately. If the plant has survived at all, it will be alive close to the base. Check for signs of life at these lower levels. Cut the plant back to the surviving bits, a few days after the frost. If the plants are remaining outside, mulch around the plant, and potentially add a plastic cover – a box, flower pot, etc. – for temporary protection from even more frost. The pruning is just for looks and won’t really help the plant, but won’t hurt either – but if any bits have gone mushy or smelly – remove them.

For Mother’s Day, I also received a smaller perfectly healthy pink Begonia, a white Orchid and a lovely selection of cold hardy perennials. It’s too cold to plant them today, not too cold for the plants – just too cold for me. The children have been trained over the years that mom loves plants for Mother’s Day. I’m glad I didn’t get any of these nice pieces of garden decor!